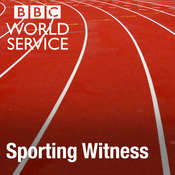 von
Nancy Greene: The 'Tiger' of women's skiing
In February 1968, the Canadian skier Nancy Greene pulled off a flawless performance at the Winter Olympic Games, winning the Giant Slalom by a record-breaking margin of 2.6 seconds. Greene was nicknamed “Tiger” because of her attacking style, and the commanding victory made her one of the most popular Canadian sportswomen of all time. Nancy Greene talks to Freddy Chick. (Photo: Nancy Greene is cheered by her Canadian team-mates in 1968. Credit: Getty Images)
Knocking down Mike Tyson
In February 1990, a little-known fighter called James “Buster” Douglas pulled off arguably the biggest shock in boxing history by beating the previously undefeated Mike Tyson to take the world heavyweight title. The fight was expected to be such a foregone conclusion that only one casino agreed to take bets on a "Buster Douglas win, but the outsider battered “Iron Mike” again and again with his jab and eventually knocked him down. Buster Douglas talks to Ned Carter Miles. The programme is a Just Radio Production. PHOTO: Buster Douglas in 1990 (Getty Images)
Rocky Bleier: The legendary comeback
How a wounded Vietnam war veteran became an NFL Super Bowl champion. Rocky Bleier was a young American football player beginning his career in the NFL with the Pittsburgh Steelers. But in 1968 he was drafted into the US Army to serve in the VIetnam war. He was injured in combat and his career appeared over. But Rocky fought his way back to become a member of the legendary Pittsburgh Steelers team that won four Super Bowls in the 1970s. Alex Last spoke to Rocky Bleier about his remarkable comeback. :Photo: Rocky Bleier in 1975 (George Gojkovich/Getty Images)
Stanley Matthews' Soweto team
In 1975 a group of young black soccer players from apartheid-era South Africa went on tour to Brazil. They were part of a team known as "Stan's Men", organised by the English soccer legend, Sir Stanley Matthews, in the black township of Soweto. Matthews had been helping train youngsters in South Africa since the 1950s, in defiance of the racist white government, and continued travelling there after his retirement from English soccer. Mike Lanchin has been hearing the memories of Hamilton Majola, one of the players who traveled to Brazil with the team, and to Matthews' daughter Jean. Photo courtesy of Jean Matthews.
P.T. Usha - India's 'queen of track and field'
In the 1980s, P.T. Usha, a sprinter and hurdler from the southern Indian state of Kerala, became the first woman from her country to achieve major success in athletics. But in 1984 she missed out on a medal at the Olympic Games in Los Angeles by an agonising 100th of a second. P.T. Usha talks to Farhana Haider. (Photo: P.T. Usha in action in the 1980s. Credit: Getty Images)
Mehr anzeigen