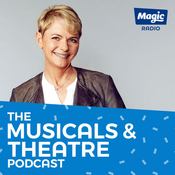 von
13x11 Tom Chambers
This week Alice was joined in the studio by actor, strictly winner and fellow Mellow Magic presenter Tom Chambers. They chatted about his career, what it was like to win Strictly Come Dancing and the new play he is about to go on tour with Dial M for Murder. Tickets for the UK tour of Dial M for Murder are on sale now.
13x10 Michael Brandon
This week on the Musicals and Theatre Podcast Alice was joined in the studio by Michael Brandon who is currently starring in White Christmas at London’s Dominion Theatre. They chatted about his vast and varied career including performing on Broadway with Al Pacino and his famous role in Dempsey and Makepeace. White Christmas is on at the Dominion Theatre until the 4th of January.
13x9 Ball and Boe
A few weeks ago Ball and Boe popped into our studio to record a special show with Alice. They chatted about their new album Back Together, what happens when they go on tour and finally performing together in Les Misérables. This podcast is made up of parts of the show plus some bonus bits that got cut out.
13x8 Luke Evans
This week’s podcast is a special show Alice recorded for Mellow Magic with Luke Evans. This is a special extended version of that show with bonus bits that didn’t go on the radio. They chatted about his new album, his career on the stage and how playing Gaston in the Beauty and the Beast now get’s him stopped in the street.
13x7 Wendell Pierce & Sharon D Clarke
This week Alice is backstage at the Piccadilly Theatre currently home to Death of Salesman. She popped into Wendell Pierce’s dressing room to chat to him about the play, his time in London and his career. Then she wondered over to Sharon D Clarke’s dressing room where they chatted about her role in Death of A Salesman, her time on Holby City and reprising her Olivier winning role in Caroline or Change on Broadway next year. Death of Salesman is on at the Piccadilly Theatre until 4th of January
Mehr anzeigen