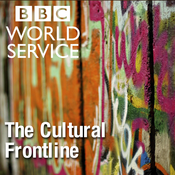 von
Sir Steve McQueen: Great British artist
The working class London kid who became an Oscar winning director, the artistic maverick who became a knight of the realm. Tina Daheley speaks to Sir Steve McQueen about the influences that turned him into one of Britain’s greatest living artists as a career spanning exhibition of his work opens at London’s Tate Modern gallery. Plus the visionary Iranian film-maker and artist Shirin Neshat talks about her latest work, Land of Dreams. She reveals why she has turned her lens to Trump’s America, to tell the stories of ordinary people, their hopes and dreams and how she hopes art can foster a greater understanding between the United States and Iran. Presented by Tina Daheley (Photo: Steve McQueen. Credit: Getty Images/Michael Kovac)
Ana Tijoux: Rapping to change Chile
Described as Chile’s answer to Lauryn Hill, Chilean hip hop em cee Ana Tjoux has made her name rapping against inequality. Ana tells Tina about her recent track #cacerolazo, which became an anthem for the 2019 protests in Chile. The soundtrack of the demonstrations, wooden spoons drummed on pans, form the beat beneath her words. Taking extreme risks for his rhymes, Iraqi rapper Mr Guti continues to make music about his city, Basra, despite several threats to his life. Drawing attention to the dangerous conditions and civil unrest in his country, we hear why Mr Guti filmed a music video in a burning government building. Move over Outkast, step aside Run the Jewels. There is a new star duo that could be changing the way we think about rap, Hip-Hop Psych. Hip Hop Psych is made up of Dr Akeem Sule and Dr Becky Inkster, a Consultant Psychiatrist and a Clinical Neuroscientist. They reveal how they are using hip-hop to better treat and understand mental illness. Presented by Tina Daheley Image: Ana Tijoux Image credit: Getty/C Brandon
Cho Nam-Joo: The untold story of Korean women
As the rise of feminism and the #MeToo movement continue to make a big impact in Korean society, we meet the women who are defying tradition in order to write their own narratives with their art. Cho Nam-Joo is the author behind the controversial novel, Kim Jiyoung, born 1982, at the centre of Korea’s new feminist struggle. She discusses how her book sparked a national discussion and why she’s telling the story of a very ordinary woman in order to challenge the country’s restrictive gender norms. K-Pop has long been entangled in the debate about sexist attitudes in Korean culture, and some women from within are speaking out. Amber Liu made her name as one fifth of the Korean girl group f(x), where she was both loved and scorned for her unique androgynous style. She tells us how she’s continuing to break the mould with her new solo music. While some are tearing traditional culture down, visual artist siren eun young jung is fighting to keep it alive. But her focus is a form of traditional performance theatre that is only open to women - yeoseong gukgeuk. Siren tells the Cultural Frontline why she’s spent a decade preserving this lost art and staging new performances. A city and its communities divided by race. The Korean-American author Steph Cha reflects on the continuing legacy of the 1992 Los Angeles riots in her new novel Your House Will Pay. Presented by Tina Daheley Image: Cho Nam-Joo Image credit: Choi Seung-do
Murad Subay: The walls remember
When war broke out in Yemen, Murad Subay began painting murals on the shelled and bullet-marked buildings of his home city of Sana’a. His colourful messages of protest and hope raised awareness of the conflict’s impact on Yemeni civilians. He encouraged passers by to join him as he worked, and together they filled ruined homes with images of peace. Journalist Sumaya Bakhsh traces Murad’s journey as he leaves Sana’a for Cairo. International travel is rarely simple for citizens of Yemen, and we hear from Murad as he languishes in Egypt, stuck without a visa and unable to create new work. Murad is used to living and working in the toughest of conditions, but this period of inactivity is a new test for the prolific artist. Eventually Murad receives a visa and arrives in the UK to launch a new campaign. Painting with Murad on the streets of London, Sumaya digs into his process as Murad explains why ultimately he must return to the conflict in Yemen, armed only with his brushes and spray cans. Photo: A mural by Murad Subay Credit: Murad Subay Murad Subay is voiced by Fayez Bakhsh Presenter: Sumaya Bakhsh Producers: Robbie MacInnes and Simona Rata An SPG production for the BBC World Service
Meet Dimash, Central Asia’s Biggest Pop Star
Sell out tours, millions of social media followers and adoring fans across the globe. Welcome to the world of Dimash, Central Asia’s biggest pop star. We find out how he went from a child singer to a pioneer of pop music and why he is trying to change the world’s perception of his home country, Kazakhstan. Has a song, a book, a work of art ever changed the way you see the world? Zandra Rhodes, one of British fashion’s leading trend setters, reveals why the work of the artist Duggie Fields inspires her. They have been dubbed “the wildest DJ crew and label in Mexico” and have been credited with revolutionising a dance music scene in Mexico City that has been devastated by the War on Drugs. The BBC’s Emmanuella Kwenortey speaks to the creative minds behind the pioneering artistic collective NAAFI and finds out what drives these cultural mavericks. Plus we find out why the sky is the limit for Indian statues. The writer Sandip Roy explores the increasingly competitive and record breaking nature of public art and public life in India. Presented by Tina Daheley Image: Dimash in concert. Credit: Nikita Basov
Mehr anzeigen